The Speakeasy Prompt: What do you remember?

Okay, so this week’s sentence prompt, provided by last week’s winner Janna, can be used ANYWHERE in your piece. And our media prompt this week is a song, which you will find below. As with all our media prompts, your post shouldn’t be about the song, but you must make some sort of reference to it in your submission.

The sentence to be used:  “At the time, it seemed like a brilliant idea.” 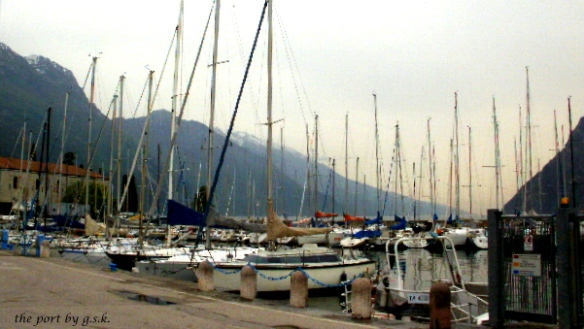 Walking along the docks she looked at the boats and remembered her years of sailing, now long past. She’d sold her cat when she decided to get married. At the time, it seemed like a brilliant idea.  Time to settle down, time to raise a family. She had her iPod in her ear, it played: “I will remember you.”  She started thinking about who she’d been, who she was now.

She’d slipped into being wife and mother.  She’d also slipped into taking care of her husband’s interests, his talents, buoying up his moral in moments of depression.  Her son made her heart sing, as over the years he grew from that tiny bit of joy and worry to the man he’d become.  He had gone on with his life, his own interests, his own family.

Now it was just she and Justin.  Justin and his life, but she wondered where she had gone to.  Walking on, she thought about her own talents that had languished over the years, of her own interests as she’d dedicated her energy to her family life.  The problem of course was that she’d made Justin become totally dependent on her presence.  He wouldn’t even be able to find a pair of socks without her.

She walked to the yachting club and went through the glass doors.  In the office she filled out a membership card.  This gave her the right to participate in the various activities of the club.  It also gave her the opportunity to become part of one of the sailing teams.  If she could make the grade that is.  She signed up for the trials that would take place in September, wondering if she had a chance.  If she were selected, she would participate in the various regattas planned for the season.  Her imagination soared with joy as she remembered past regattas.  She also signed up for a week-long sail to Spain and back that would be leaving in two weeks. She felt it would be a good way to get back into form.

“What have you done?  Are you out of your mind?” Justin roared, “You can’t just up and decide to take off without consulting me!”

“Seems that you just got back from a week-long hunting trip and you didn’t consult me.  You just decided and then informed me.”

“Ah..so you needed to avenge yourself on me!  You’re just like your mother!  You always do just as you please and never take other people’s needs into consideration!”

Over the years she’d heard that song sung so many times she didn’t even listen anymore.  She prepared dinner and that evening she called her son to inform him too of her decision.

“That’s a brilliant idea Mom!  It was about time you started taking care of yourself.”

As the week passed she bought a tablet, sailing togs, other equipment she’d need for her voyage and placed everything in her new duffel bag.

The day came and Justin drove her to the docks. He tried one last time to persuade her to give up the idea of leaving, but he knew it was useless.  He didn’t recognize her any more.  She walked on board, and turned to wave him a good-bye smiling.

A feeling of freedom filled her soul as the wind blew her hair into her face. She realized she’d been sleeping for so long.  Now she was awake again.

18 thoughts on “The Speakeasy: Remember?”