Walking along the paths of life, one receives many impressions, things that seem just so…but in reality have nothing to do with what’s happening at all.  We are in a way enslaved by our senses. 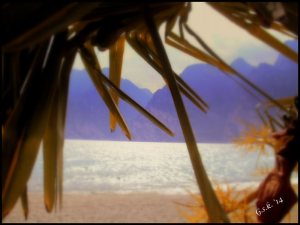 Because we see a palm frond placed in front of a beach, we mistake a lake for an ocean …

Early bloomers make us think that spring is around the corner …

Or maybe we mistake a reflection for reality …

We see children arguing and mistake their normal childhood exuberance for something more sinister and jump in to divide the contenders, only to be rewarded with a bland look of surprise!

So it can happen that the man who we thought was an enemy because he refuses what we feel is a gesture of peace, refused the gesture because he thought you were trying to belittle him!

We are born without any particular prejudices … we learn the smell of our mother almost instantly, the sound of her voice, the warmth of an embrace and we create, inside our reservoir of memories,  feelings of security associated with these first sensations…and we never stop creating memories and emotional associations, until that last moment we have to live on Earth.  As the Buddha would warn us though, our memories and sensations are an illusion, which sometimes can lead us into error.  We should doubt everything … renew our vision and not live through sensations.

There are two posts this morning for the Ligo Haibun Challenge, basically because when I went to publish this, I realzed I hadn’t put the title up…so I blocked the publishing process and lost everything that was written, or so I thought , and so rewrote the whole post, thenl a half an hour later  I found this on the reader ..  go figure 😉

“Doubt everything. Find your own light.” ― Gautama Buddha

12 thoughts on “A Haibun gone astray”