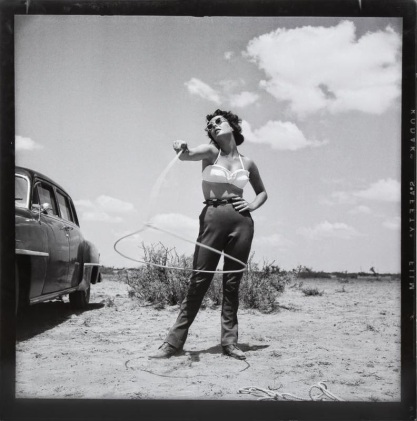 Elizabeth Taylor, Set of “Giant”, by Frank Worth.

Born on a ranch  not far from Fort Worth, Texas she’d learnt to ride before she could walk.  Her father had hoped she’d be the son he’d always wanted but after 6 kids her mom figured she’d done her bit, so Emily was their last child.

Emily complied unknowingly to his wishes.  She learnt to ride, as I said, very early.  From that moment onwards she was destined to walk in her daddy’s footsteps, she was going to be a Rodeo Queen, just like he’d been a Rodeo King. Rodeo was in her blood.  He’ took her all his tours with him. True enough, he was a little too old to get into the heavy competitions, but he’d participate in the horse riding competitions.

She was 19 the day she died.  She was a contestant for at the Calgary Rodeo Stampede.  She could ride with the best of them and had already won many prizes.  The Calgary Rodeo was going to make her into a rodeo star.   It was just pure bad luck that the bull gored her.  She’d been riding a bronk and had just been thrown when an angry bull broke out and ran into the arena.  She’d just gotten up and was brushing her jeans off with her hat so she didn’t see that a bull was charging her. The cow-hands hadn’t been quick enough to distract the bull. He was one mean critter.

Her favorite song was “Hallelujah” by Leonard Cohen.  She’d listen to it at least a hundred times a day singing along with Cohen as her dad and she drove their camper from one rodeo to another.  So her dad insisted that the pastor play that song during the opening of the funeral service.  She’s buried in the private family cemetery on the ranch.

Her dad, from that day on, just kind of wasted away.  He died a few months after she did. He’s buried there too, the king near his princess.

I apologize to anyone who knows anything about rodeos … This is just pure fantasy.  I know there is a Calgary Rodeo Stampede because way back in 1966 going to Alaska from Illinois my parents decided to take the ALCAN highway and we stayed a couple of days in Calgary.