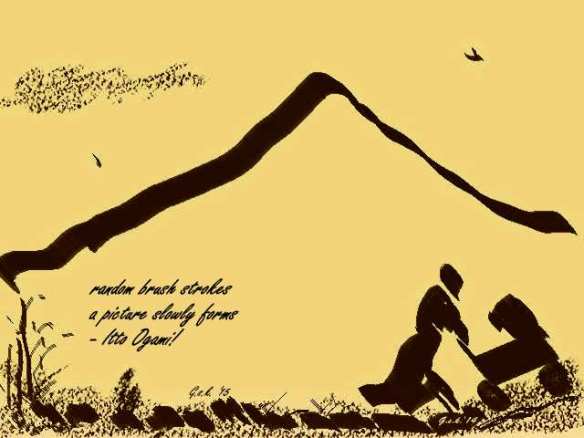 Many years ago on Italian television (when I still watched TV) there was a TV series that my son loved to watch and alas I enjoyed as well .. it’s the story, based on a Manga created by Kazuo Koike (in English it’s known as the “Chronicles of Lone Wolf and Little Cub“) of a Ronin Samurai who travels through-out Japan with a baby in a carriage …I never knew quite why he had this baby in a carriage, but it’s one of the main characteristics of the series.

Christmas day I was trying out my electronic drawing board, just fooling around with the various brush strokes and the above picture eventually came about … I was surprised when the carriage started to form but I decided to “go with the flow” … the mountain, birds and bamboo were already in place … I put it up on my blog as my “drawing number two” a la “Little Prince” and forgot about it until today when by chance I came across the TV series Itto Ogami on YouTube … the rest is all in the haiga!