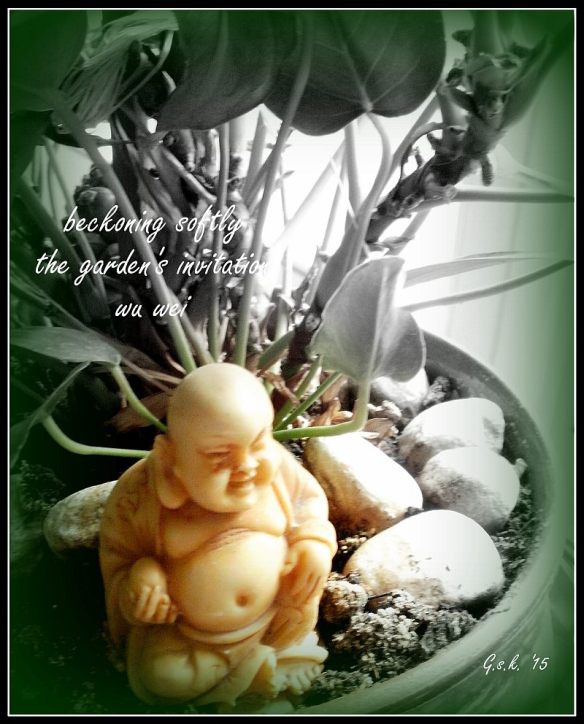 This is one of the fundamental principles of Taoism and therefore Zen Buddhism which is a mixture of Taoism and Buddhism.  Literally it means non-doing, non-action … or  “the morality of no morality,” “the knowledge of no knowledge,” … of course it’s a paradox as are many of the Taoist principles …  here is an extract from a discussion on wu wei … and I’ll put the link HERE so that if you’re interested you may go and read the whole page.  The subject of wu wei is rather complicated in its simplicity and is very foreign indeed to our ways of organizing our life.  From the gentle art of calligraphy to the art of archery going through the famous tea ceremony … in fact all aspects of Zen art … wu wei is the goal … that is to do without doing … action in inaction:

“It is significant that one finds the same paradox in other Asian traditions which maintain the nonduality of subject and object. Not surprisingly, it is most common in Chinese Buddhism, where Taoist influence is to be expected. However, that wei-wu-wei is a paradoxical synthesis of nonaction in action is more clearly recognized in Buddhism. Seng Chao maintained in the Chao Lun that action and nonaction are not exclusive: Things in action are at the same time always in nonaction; things in nonaction are always in action. [28] This claim is expounded in the first chapter, “On the Immutability of Things,” but the point is important enough to be repeated in chapter four, “Nirvana is Nameless”: “Through non-action, movement is always quiescent. Through action, everything is acted upon, means that quiescence is always in motion.” [29] One of the earliest Ch’an texts, the Hsin Hsin Ming of the third patriarch Seng-ts’an, states twice that the awakened mind transcends the duality of rest and nonrest, [30] echoing the argument of Nāgārjuna that both motion and rest are incomprehensible and hence unreal (śūnya). [31] Probably the best-known example, definitely not derived from Taoism, is found in a passage from the Bhagavadgītā which explicitly describes action which is yet no action:

He who in action sees inaction and action in inaction — he is wise among men, he is a yogin, and he has accomplished all his work.
Having abandoned attachment to the fruit of works, ever content, without any kind of dependence, he does nothing though he is ever engaged in work. (IV, 18, 20) [32]

The Sanskrit word for action, karman, suggests an interpretation of these verses which sees them as recommending action that does not bring karmic results. In answer to the Buddhist and Yogic emphasis on withdrawal from the world of social obligation, the Gītā claims that action too may lead to Krishna because no karman accrues if an act is performed “without attachment to the fruit of action.” “