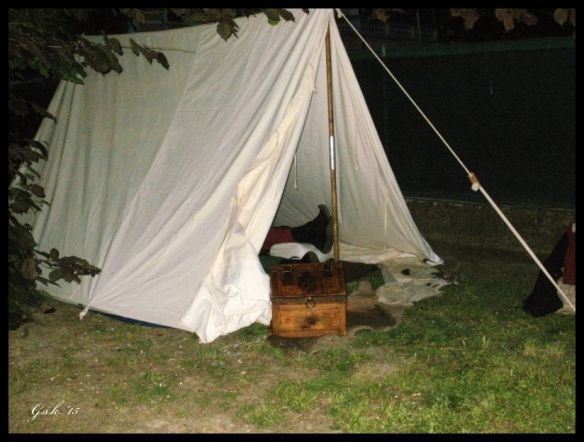 Our “Sergeant at Arms” resting

It’s a prevalent belief that vacations are a relaxing affair and glibly people go on and on in ambling monologues talking enviously about this or that person who’s recently been off to “rest and relax”.  However, some of those vacations can put you into a desperate morass of fatigue.

I am part of a Medieval Troupe and we pass our vacations putting up historical re-enactments.  Choking heat that shimmered across the Lombardy Plain two weeks ago as we arrived in the small town of San Giorgio in Piano.  Heat radiated off the asphalt and cement but we happily found that for once our campsite would not be in the middle of a field, but a quiet shaded public garden surrounded by a brick wall interspersed with wire mesh.

We began setting up camp pulling all our equipment (tents, tables, armour et al.)  down the gangway of the large van used for these occasions.  The organizer was all aquiver with anxiety, we’d arrived at 11:00 and the Medieval Fair opened at 3:00 and she wanted to be sure that all would be ready for the event but she needn’t have worried, the company has had years of experience setting up camp.

By 2:00 we only needed to put the finishing touches to our camp and it was amazing how the garden seemed to have shrunk as each large tent was set up.  We put on our clothes … rigorously bought or sown to the specifications of our period; 1400 – 1432. Then, just as though we were at court we set at our table, the Captain in his great chair, then toasted our new adventure with Radler beer (rigorously poured into earthen pitchers) and sandwiches with half an hour to spare.

The rest of day was long, we had two parades through the town in costume that day, a couple of duels, a play, re-enacting an imaginary but possible abuse of the local powers of the age. By 7:00 our “Sergeant at Arms” who is also the coordinator of our public shows was sagging with the efforts of his day and finally, before our last show, decided to rest for a few moments in one of the tents, which are open for people to see how the knights and their entourage would have slept back in that period.

I wondered what people thought as they saw his feet poke out of the tent … did they think this was a bit of medieval life put up for their benefit?  I was sure that no one realized that he’d arrived late at camp and had worked non-stop and under very stressful conditions coming straight from the hospital where he’d spent the whole evening before with his son who’d had a bad allergic reaction to a bee sting.  Such are vacations at times!

1. Prevalent 2. Glib (readily fluent, often thoughtlessly, superficially, or insincerity so) 3. Amble 4. Choke 5. Morass (any confusing or troublesome situation, especially one from which it is difficult to free oneself; entanglement; a marsh or bog) 6. Cement 7. Mesh 8. Sonder (the realization that each random passerby is living a life as vivid and complex as your own.) 9. Aquiver 10. Gangway (a passageway, a narrow walkway) 11. Shrinkage 12. Court