Le mondine were itinerant working women who left their homes in summer to work in  the rice paddies in Northern Italy (work began in the month of June until harvest time) during the 19th and part of the 20th century.

Work conditions were terrible and the pay just enough to barely make the sacrifices worth while.  The women spent long hours during the early season bare-footed and  knee-deep in water transplanting the new rice and endless hours under the sun weeding the plants as they grew.

A famous film all about their life and work starring  entitled “Bitter Rice” came out in 1949 starring Vittorio Gassman and Silvana Mangano. 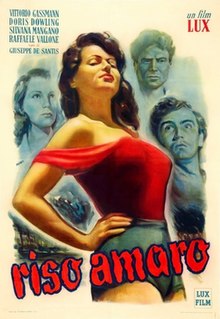 le mondine
singing under the hot sun
dreaming of autumn