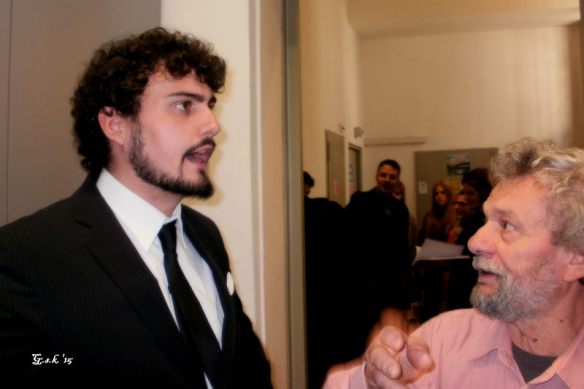 I’ve been off-line since Sunday afternoon and will probably not be writing on my blog for a few days.  Unfortunately my husband met with a fatal accident, it seems that probably due to a fall (where he’d hit his head and bruised his back and legs a few weeks ago) he probably had a micro fracture which went unnoticed because when he only consulted our doctor about the vivid bruises he disregarded the rather large bump on the back of his head. Our doctor believes that he probably was a victim of an aneurysm or something similar due to the fall which broke loose while he was riding our moped.

Luciano was an artist.  He’d created his own form of artistic expression (which I’ll call “glass works”) and created some really beautiful pieces of which he was justly proud.  He was a cancer survivor and had just received the results of his recent analysis reassuring him that no new cancer cells had been found, for which he was very relieved.  He had the opportunity to see his son receive his Master of Arts Degree in Modern History with honours for which he was both proud and happy. And though we had our ups and downs as do most couples … we had many wonderful moments together.

He didn’t expect to die any time soon  … he didn’t write a poem for his passing, so I will try to write his jisei for him.

Below is a sample of Luciano’s work and a few articles I’d written in the past.  Many of the photographs that you’ve seen over the last few years on my blog were taken during walks I’ve with him.  These photographs were taken by me as well … the quality is poor but they will give you an idea of what he used to do. The opening photo is the last photo I took of him with our son on the day of our son’s graduation, just a few days before his passing.

A Triolet and A Sedoka