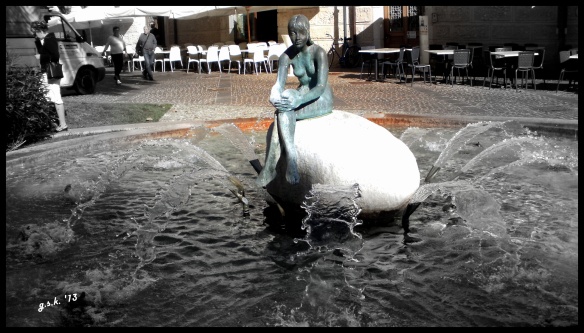 In a kitchen bright with chromium shelves,
A plethora of pans and a conveyor belt,
The blast of the oven freed a vortex of smells –
Of apples, onions and cinnamon too.

The receptionist stood at the kitchen door
Tapping his foot in disgust and dismay
He sought out someone to clean up the hall
(A mad tourist had smeared vaseline everywhere).

In the bedlam of the kitchen he went ignored,
Everyone was busy doing this or that …
He let out such a wail of ire and bile
He surprised a young mermaid, swimming nearby.

The chef in his cap glowered balefully
At the man who’d made his orange souffle fall
Pivotal for the evening meal it’d been …
Now he’d have to start over again.

The vaseline gone, the souffle risen high,
The hotel was ready for their special guest …
Everyone wore their uniforms with pride …
As the Michelin gourmet sat awarding his stars.

Yes, the Michelin map now has a new five-star hotel
Near a hillside that overlooks the Zuiderzee,
The gourmet raves at the wonders of their orange souffle
And the bright clean sheen of the reception hall.